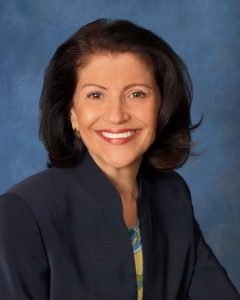 Brenda is a former President of the Camden County Bar Association (2012-2013) and Bar Foundation (2014-2015). She served for ten years as Co-Chair of the CCBA Probate & Trust Committee. In 2014, Brenda was recognized as the “Professional Lawyer of the Year” by the CCBA and received an award from the New Jersey State Bar Association’s Committee on Professionalism. She is the current Co-Chair of the Women in the Profession Committee. She also coordinates the Wills for Heroes Program presented annually by the CCBA and Rutgers Law Estates & Trusts Society which prepares free wills and other estate planning documents for first responders. She is a frequent lecturer for seminars presented by state and county bar associations. She has served as a member of the District IV Ethics Committee and is a member of the New Jersey Supreme Court’s Roster of Qualified Mediators.

Brenda’s roots stem from Camden City. As a young child, she lived on Atlantic Avenue near Broadway and attended Sacred Heart School. In her early teens, Brenda, with her mother and two brothers, moved to East Camden where she graduated from Woodrow Wilson High School. Upon marrying her husband, Jimmy Herman (also an attorney), Brenda settled in Cherry Hill.

Prior to becoming a lawyer, Brenda worked for over twenty years as an estates and trusts paralegal and served for five years as Deputy Surrogate of Camden County. As Deputy Surrogate, she was co-founder of H.O.P.E., Inc. (Helping Other People Evolve), an education and support group for widowed persons. While teaching paralegals in the 80’s, Brenda and several of her students founded the South Jersey Paralegal Association which continues to provide education and support to paralegals.

Brenda devotes considerable time to fundraising efforts for non-profit organizations and charitable endeavors. She is a former Chairperson of the South Jersey Chapter of the March of Dimes and served for several years as Chair of the Chapter’s Annual Sports Awards Banquet. In 2011, she received the Good Neighbor Award from the Camden County Chapter of the American Red Cross for her advocacy on behalf of the elderly and families. In 2013, she was honored by the Woodland Community Development Corporation for her services to the children and families living in Camden City.

Brenda is an avid sports fan. In her spare time, she enjoys playing golf and being with her family and friends.